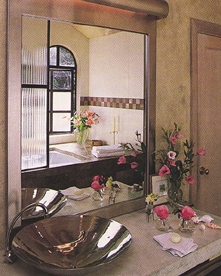 Considered an artistic luxury in the 80’s, designing with alternative materials is now being embraced by professionals and homeowners with new practicality of the 90’s.

When Brooke and Sandi Leatherman wanted to remodel the master bath in their California home, they turned to John Halley and Dianne McKenzie of Comet Studios, the highly inventive husband-and-wife design team from Sea Ranch, California.

The designers, known for turning utilitarian materials into tame and beautiful domestic objects, were asked to create a lively artistic statement from a pedestrian bath. The one proviso: Keep the existing structure and plumbing in place in order to stay within a $10,000.00 budget (which included completing a sauna next to the bath).

Halley and McKenzie began by painting the cathedral ceiling in a faux marble finish, then washed the walls with a two-color glaze to evoke the feeling of parchment. Existing tiles on the floor and around the tub inset were left intact, as were the bathtub and toilet. The old sink was torn out; in its place the designers created an antique-looking vanity with a 4-inch-thick cast concrete countertop (it cost a fraction of what natural stone would have). Stock 2-inch copper tubing supports the counter, and a specially designed stainless steel sink sits atop the vanity.

For the shower and tub, McKenzie and Halley designed an enclosure made of fluted glass to allow natural light to enter through two existing windows above the tub. The enclosure is trimmed with black steel, echoing the window frames. Floor-to-ceiling commercial wire shelving between the toilet and tub offers much-needed storage.