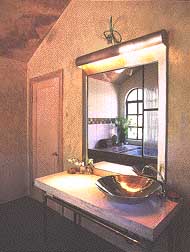 Dianne McKenzie, an artist/designer working out of her studio in Sea Ranch, had known the Leathermans for years, patiently watching them redesign their intriguing house room-by-room basis. “I was itching to get my hands on the bathroom because it had such fantastic architectural lines,” says McKenzie. – Home Garden January

The Leathermans liked what McKenzie had done with her own house on a windswept section of the rugged Sonoma coastline and asked her to incorporate some of her unusual design ideas into their bathroom.

The talented artist, whose background is steeped in textiles and weaving, had begun exploring design possibilities using industrial materials and simple objects as prototypes for residential installations. For the Leatherman’s bathroom, she designed a stunning countertop from a solid slab of concrete, using exposed copper piping for legs and support.

“The counter is deliberately set a few inches lower than usual because I added a freestanding stainless steel sink in the shape of a wok on top of the slab,” says McKenzie. “The sides of the bowl would have been too high for most people to use comfortably, but dropping the countertop proved an ideal solution.”

McKenzie also designed a stainless steel vanity mirror, which reflects the charcoal gray marble tub and dramatic windows, making the room appear much larger than it is. The mirror has concealed lighting which casts a rich glow on the sink.

“I initially thought of using a wok, but I think this bowl is really effective and it has a beautiful gleaming finish, which acts as a good contrast to the solid concrete slab,” says McKenzie, who applied her artistry to walls and ceilings. She painted a faux marble glaze over the rough plastered walls. The effect is both elegant and sophisticated.

The Leatherman’s had never solved the problem of what to do about a shower screen. They didn’t want doors that would detract from the windows, and the tub, but they needed something to prevent excess water from spraying all over the floor. “Dianne designed us a superb shower screen in fluted glass,” says Sandi.

The screen takes on sculptural proportions as it soars from the rim of the tub into the sharply pitched lines of the cathedral ceiling. “This bathroom has become a focal point of our house,” says Sandi. “Everyone loves what Dianne did with it and now we can’t wait for her to begin working on some of the other rooms in our house. She knows just what is needed to give a room the perfect finishing touch.”